Korea’s most internationally recognized food, kimchi brings together ingredients from across the country. To make good kimchi, you need the very best ingredients. And if you’re getting your ingredients at the source, this is going to require some leg work. Let’s hit the “Kimchi Road” to discover the journey your kimchi takes before it lands on your dinner table. 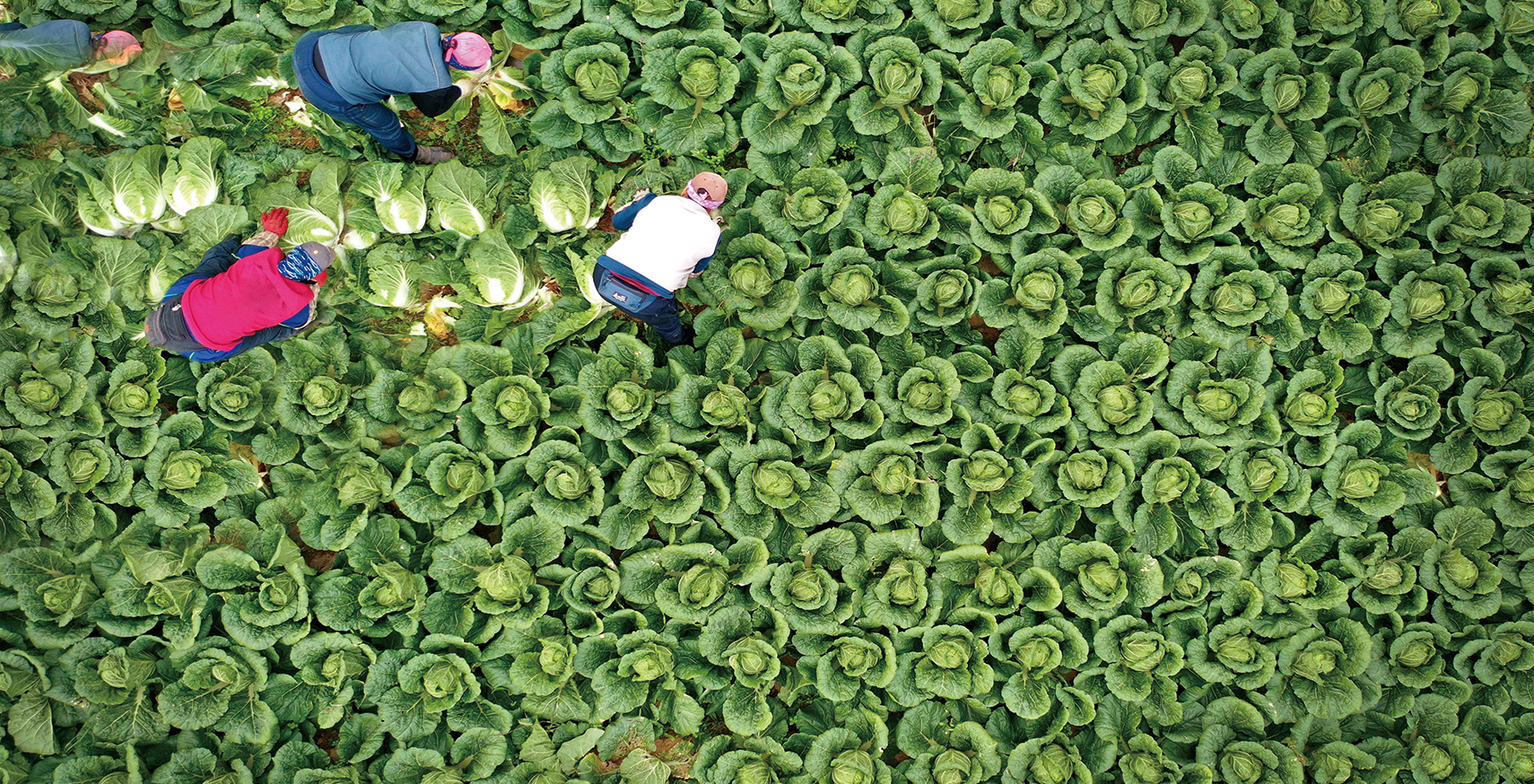 We start our journey in the far south-western tip of Korea, in the picturesque rural community of Haenam. This is a land of rugged mountains and brilliant seasides. And lots and lots of cabbage. Sprawling, rolling hills of the stuff.

Cabbage is the chief ingredient of kimchi. Several regions across Korea produce cabbage, most notably the highland areas on rugged Gangwon-do Province. Haenam, however, produces 70% of the country’s “winter cabbage,” a hardy variety that yields especially crunchy kimchi with a uniquely sweet flavor.

Up until the 1970s, Koreans considered it impossible to grow cabbage in the cold winter. In the mid-1970s, however, farmers on Jeju Island began cultivating a breed of cabbage that thrived in lower temperatures. In the 1980s, farmers began cultivating the crop in Haenam, where the mild winter temperatures and maritime conditions proved ideal. It takes only 90 days to raise the crop, which farmers typically harvest in mid-November.

Traditionally, families produced large amounts of kimchi in autumn and stockpiled it for the winter months. With the advent of winter cabbage, however, Koreans now make fresh kimchi throughout the winter, with some families stockpiling kimchi in late winter to eat through spring and summer.

As you know, Koreans have a proud history of fermentation. This tradition extends to seafood as well. Jeotgal, especially its liquefied form called aekjeot, is a common ingredient in kimchi, lending it a distinctively salty flavor.

From Haenam, head north about two hours until you reach the Byeonsan Peninsula and the seaside town of Buan. Best known as the home of Byeonsanbando National Park, with its spectacular autumn colors and dramatic coastal cliffs, Buan is also home to some of Korea’s finest salted seafood, or jeotgal.

You need fresh seafood to make tasty jeotgal. Locals catch fish in spring, when the fish are fat. The fish are salted the day they are caught and left to mature for a year. After maturing for a year, the fish is kept at a constant temperature in the basement for another year for a secondary maturation.

The small fishing port of Gomso in Buan produces high quality jeotgal, partly thanks to the large salt farms nearby. Visitors must be sure to try the local jeotgal baekban: rice, soup and a platter of jeotgal, served with broiled hairtail.

It wouldn’t be kimchi without a bit of spice. And for that, you need peppers. Hot ones.

Drive another hour north from Buan and you’ll come to the bucolic agricultural town of Cheongyang, Chungcheongnam-do Province. Nestled in the valleys of this quiet little corner of central Korea are fields of the country’s most beloved peppers, the fiery “Cheongyang pepper.”

The Cheongyang pepper is a relatively recent creation, created by researcher Yoo Il-woong in 1983 by hybridizing Jeju Island peppers with Thai peppers. In terms of size, they might not look like much, being a tad on the small side. But they pack an oversized punch, clocking in at 10,000 Scoville heat units. The name is an odd coincidence, a portmanteau of the names of the towns where the peppers were first cultivated: Cheongsong and Yeongyang in southeastern Korea.

The valleys around Mt. Chilgapsan is home to many pepper farms due to the dramatic gaps between daytime highs and nighttime lows and excellent drainage, conditions that result in a thick skinned pepper rich in capsaicin, the active ingredient that gives peppers their kick.

The very best, and most expensive, Cheongyang peppers are dried in the sun. Because of this, country roads are often covered in harvested red peppers in Autumn, where they dry in the direct sunlight. Most peppers, however, are first dried in a machine before they are left to dry in the sun.

The dried peppers are later ground into pepper powder to use in preparing kimchi and other foods.

The main ingredients are now ready to be reborn as kimchi through kimjang.

Kimjang, the making and sharing of kimchi, was inscribed by UNESCO on its list of Intangible Cultural Heritage of Humanity in 2013. “The collective practice of kimjang reaffirms Korean identity and is an excellent opportunity for strengthening family cooperation,” explains UNESCO. “Kimjang is also an important reminder for many Koreans that human communities need to live in harmony with nature.”

Kimjang traditionally takes place in late autumn. Entire communities come together to make and share kimchi, not only lessening the work burden but also ensuring that every family has enough kimchi to last the entire winter. In the past, families would bury kimjang kimchi in pots to preserve it during the cold winter, though nowadays, most families store their kimchi in ubiquitous “kimchi refrigerators.”